As the United States of America is a heavily over represented country in media, Fighting Games are no exception, we have an entire article dedicated to the characters from USA. We will be doing the same for Main land China and Japan. American characters tend to be way more diverse than many other represented nationalities as well so the character will be group by their ethnic origins. Mixed ethnic American characters will be put under one of the categories usually the lesser represented rather than appear twice on this article but for most part we will acknowledge all of their ethnic backgrounds on their sections.

.No Social, Political or otherwise unnecessary offensive comments please as this article is to share and celebrate culture and diversity

(real name Ben Ferris, is most likely White American like his voice actor but can't confirm ethnicity as we haven't seen his human form yet)

Ralf Jones from King of Fighters

(Assumed to be White American but his skinned darkened in later games. So it is unclear whether he is tanned or of an ethnic minority background, possibly from a mixed ethnic background but no clues as to which ethnicities)

Clark Still from King of Fighter

(Assumed to be White American, but his skinned darkened in later games. So it is unclear whether he is tanned or of an ethnic minority background. His blond hair could be dyed or natural but it is likely he is at least partially White American)

(real name Maya noted be olive skinned indicating she could be mixed raced or from an Ethnic minority background. Her red hair is likely dyed. Her live action actress Moon Bloodgood was of Half Korean half European heritage. But its unconfirmed)

(technically has Black Eagle's mind programmed into him. Eagle is Nez Perce much like his brother Thunder)

(Possibly originally, Lakota-Sioux origin and he refers to Raiden as "Haokah", Wikipedia states he is Apache. But MK11 has him refer to his Ethnicity as Matoka which is fictional but based off the Lakota. The Great Spirit he worships is based of the Sioux's concept of Wakan Tanka. A term for something sacred or divine)

(His specific ethnicity is the fictional Amiyai Tribe)

(Strangely his namesake refers to the Garuda, a thunderbird from Hindu culture)

(Half Chinese Half Native American)

(From Honolulu, Hawaii. Could be White but could be Indigenous Hawaiian)

(Most likely of Indigenous Hawaiian Origin)

Super Macho Man from Punch Out

(His ethnicity is not clear, but he is based off Superstar Billy Graham, Hulk Hogan, Rick Flair and Macho Man Randy Savage. Notably Billy Graham claims to be part Cherokee, Hulk Hogan claims some Panamanian heritage which could explain Super Macho Man's skin tone. He also speaks with a Hawaiian surfer dude accent)

Wyler from Art of Fighting

(It's heavily implied he is descended from European Aristrocrats, but he lives somewhere around US and Mexican border. His theme has Mexican inspired riffs and sounds to it, So at least White Mexican American)

(Same as Tracey and Leon. Has brown skin but no clues to her ethnicity. Though she grew up in New York and looking at the demography statistics Latino Americans make up the most common minority in New York so she is mostly likely Latina)

(She is Rachael's Twin Sister so presumably Latina aswell)

(This is a stretch as were-cats in the Americas are more from Meso-American cultures and most of the character's nationalities in Darkstalkers are based on the origins of their monster species. So an honourary inclusion)

(Likely half African American half Mexican American. Itagaki claimed she was intended to be Latina and implied Lisa was not her real name. Monica was her original intended name. She is likely Afro-Latina if not mixed raced)

Diego from Dead or Alive

(is stated to be Mexican American from New York City)

(Despite being loosely based off Michael Jackson, his appearance and theme song is supposed to hint at his Latino American heritage according to TV Tropes)

(Is an American likely of Welsh and Puerto Rican descent. Her surname Morgan is Welsh and her accent and use of Spanish slang is based off the Nuyorican Accent., basically Latino New Yorker accent plus she uses Spanish slang like "El Garrette")

(She is one quarter Japanese American on her grandfather's side)

(She is Chinese American)

(Bit of a stretch but he is a relative of Blue Mary, possibly sharing the same one quarter Japanese American heritage if he is her Brother or cousin)

(This is ambiguous, his whole family have European/Westernised first names but his first name Lao/Lau is a Cantonese variation of the name Lui both are also surnames not first names.)

(He is Japanese American. Some sources claim he was born in Japan raised in America or Born and Raised in America lived in Japan to train in Bushinryu Ninjutsu, most likely possesses dual nationality of both countries)

(His confirmed birth name is Frederick Bulsara. Bulsara indicating he is Asian American of Indian descent)

(She is at least partially Asian American through her alleged father Sol who has an Indian Surname of Bulsara indicating he is Indian American so Dizzy is part Indian.)

(She is mixed raced Asian American. Specifically half Korean half Chinese)

Benimaru Nikaido from King of Fighters

(Is Japanese but supposedly has "American Heritage" most likely white American)

(She is stated to be half Japanese American)

Moe Habana from King of Fighters

(Stated to be Japanese American)

Lynn Baker from Rage of the Dragons

(She is Chinese American)

Mickey Rogers from Art of Fighting

(Loosely based of Mike Tyson)

Rob Python from Buriki One

(Based off Dennis Rodman)

Zack from Dead or Alive

(Based off George Foreman)

(Based off Magic Johnson)

(He appears to be African American in Final Fight: Revenge but lighter skinned everywhere else. possibly mixed raced between Black and White ethnicities)

Heavy D from King of Fighters

Lucky Glauber from King of Fighters

Seth from King of Fighters

Kid Quick from Punch Out

Mr Sandman from Punch Out

Mike Tyson/Mr.Dream from Punch Out

(Yes Mike Tyson is a punch out character)

Disco Kid from Punch Out

Mr.Jones from Rage of the Dragons

(Based off Mike Tyson)

(Also based off Mike Tyson, He is called Mike Bison in Japan)

(Based off Terry Funk)

Jack Turner from Art of Fighting

John Crawley from Art of Fighting

(Based of John Kreese from Karate Kid)

Geese Howard from Art of Fighting

(Half Austrian American on his dad's side, also half brother of German Wolfgang Krauser too)

Rody Brits from Art of Fighting

Lenny Creston from Art of Fighting

Max Eagle from Battle of the Beast Gods

Tina Armstrong from Dead or Alive

Bass Armstrong from Dead or Alive

(He is of Italian American descent)

(Based off Guile and John Crawley)

(based off Chuck Norris)

(Real name Holga, is believed to be German American)

(Based off Brad Pitt's character in Fight Club)

Brian Battler from King of Fighters

Mignon Beart from King of Fighters

(She inherit some Mediterranean heritage from her Dad including the anti-god busting energy. Bonus point Cassandra being a Greek name)

Billy Lewis from Rage of the Dragons

Jimmy Lewis from Rage of the Dragons 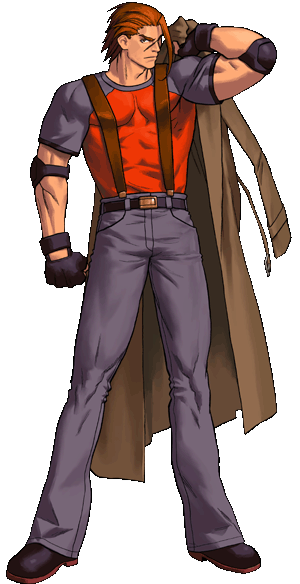 (Based off Joe Lewis)