For this article we will be covering the continent of North America. But we will exclude the United States of America due to the number of characters from the country would mean the USA will have it's own individual article instead. For this article we are covering the character from all North American countries (bar the USA they get their own article). We will potentially acknowledge ethnic minority communities and diaspora communities as well and speculate on others.

No Social, Political or otherwise unnecessary offensive comments please as this article is to share and celebrate culture and diversity.

Rig from Dead or Alive

Maxima from King of Fighters

Bear Hugger from Punch Out

(stated to be Canadian on Wikipedia, but American on the SNK Wiki)

(Is officially Canadian but was originally stated to be from the Netherlands before changed to Canadian. It is possible he is descended from Dutch immigrants to Canada if he supposed to be connected to the Netherlands in some way.)

(Nationality is officially Unknown. But on the Tekken 6 site was once stated to be Canadian. So assuming that he is Black Canadian this is an honourary mention)

(She is Raven's superior and is also stated to have unknown nationality. But assuming she and Raven both work for the Canadian Government. We can assume she is most likely Black Canadian unless Tekken confirms otherwise)

(Is of First Nation Canadian origin)

(Is stated to be Mayan, his namesake comes from the Micanga bracelets which become popular in modern day from Guatemala)

(Technically he is an Osh-Tekk from Outworld but had impersonated Buluc Chabtan the Mayan god of War and was worshiped by Earthrealmers. Add in his entire Mayan motif and weaponry. He gets an honourary mention)

(Stated to be Aztec, based off the Tzitzimitl)

Wyler from Art of Fighting

(It's heavily implied he is descended from European Aristrocrats, but he lives somewhere around US and Mexican border. His theme has Mexican inspired riffs and sounds to it)

(Likely half African American half Mexican American. Itagaki claimed she was intended to be Latina and implied Lisa was not her real name. Monica was her original intended name. She is likely Afro-Latina if not mixed raced)

Diego from Dead or Alive

(likely Asian Mexican judging by his name being Korean, but is said to be Mexican)

Angel from King of Fighters

Ramon from King of Fighters

King of Dinosaur from King of Fighters

Masked Muscle from Punch Out 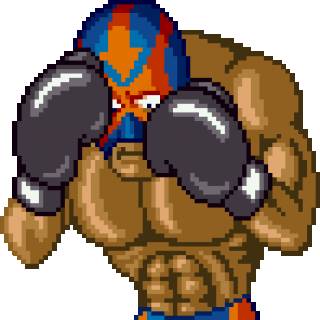 Pepe Rodriguez from Rage of the Dragons

(His sister is Pupa is stated to be Brazilian)

(Stated to be German, but her backstory in game and in comics claims she is half German on her dads side half Indigenous Mexicana on her mums side)

Piston Hurricane from Punch Out

(His stage is a ghost ship in the Caribbeans but his theme is completely Swedish suggesting he was once a Swedish Pirate and died in the Caribbeans. The character is a homage to Pirates of the Caribbean which is said to be set in Jamaica during the colonial times, so this is an honourary inclusion)

Bob Charlie from Punch Out

(Is American of likely Welsh and Puerto Rican origin. Her surname is Welsh whilst she speaks with a Nuyorican accent, a Puerto Rican New Yorker accent basically and uses Spanish slang from the same community noticeably "Al Garete")

(Stated to be Caribbean, likely Haitian if going by Voodoo in the Caribbean originates from Haiti specifically from West Africans transplanted there)